There are three details needed to have the right to call a tea puer:

These are the basics in a nutshell, now we can move forward to tasting, gaining our own experience, which — for us — is the most important aspect of tea.

Similar to wine, every tea growing area has its own specific nature: soil, climate, types of tea. These differences can be witnessed when tasting teas. Every single detail is important and makes a difference: location, altitude, weather, type and thickness of soil, rainfall. For example: many times we experienced, that teas coming from southern areas are smoother, and have rounder, and sweeter taste. The ones coming from north have more freshness and longer, more balanced (after)taste.

When buying, or tasting tea it’s worth noting which area’s ambiance is the closer to us.

In our selection there are teas from south: Mahei, Bada-Pasha, Nannuoshan and Jingmai, which is famous for its fragrant teas.

On our website there’s a tea-map showing all the mountains and villages where we have teas from.

Based on size and growing area teas can originate from

This is one of the most interesting aspect of puer teas. In most cases the tea’s final character is formed by the end the process. However, besides old trees, puer teas’ characteristics is given by the maturing process; that is why these teas are often called post-fermented teas.

The air’s oxygen content is the most important cause of post-fermentation. Accessing oxygen, the leaves of sheng (生, or living) puer continue to ripen. During the maturing process, the teas’s flavour undergoes a  major change: it turns from bitter to sweet, from rough to smooth, from from flowery scent to mature, fallen-leaf-like fragrance. Proper ageing can only be achieved with quality commodity, and contrary to the common belief it doesn’t improve  low-quality teas.

When buying, and storing puers it is important to know the basics of tea ripening process. The flavour of a matured puer is due to certain microorganism living in the tea-laves. These, and other similar microorganisms are a key to produce many types of food and beverages, such as beer, wine, cheese, bread. During the process, the chemical structure of the leaves’ primal aromatic compounds transforms thus forming new, different kinds of compounds that before simply weren’t there. Anyone who wishes to drink puer regularly needs carefully-processed tea that can be matured well, all this on a decent price. In this case a professional’s help is almost crucial.

The sun-dried leaves are called maocha (毛茶, or raw tea). Based on long years’s experiences the teas are first steamed then pressed into certain forms in order to simplify shipping and storage. The tea can be stored either in maocha state or pressed, however in the first case the ripening will be way faster. There are a few special, frequently used forms: cake, brick, mushroom, or small balls only enough for a single brew. The biggest form is the dragon-egg, that can weigh as much as 3 kilograms.

When pressing the tea its destination too, is taken into account: those heading to more humid regions are pressed more firmly so that the tea will age slower.

Before brewing tea from a teacake it is lightly steamed in order to loosen the leaves, then with a special tea-knife the cake is horizontally opened (this way the leaves stay unbroken). When the cake is opened a small amounts of tea (5-6 gramms) can be separately brewed. A more detailed introduction to the completion can be found here.

Plucking, few hours of wilting, decomposition of enzymes, found in the leaves, by a minor baking process, rolling, sun-drying: these are the basic steps of sheng puer production. When making green tea, the heating process lasts 40-45 minutes and like this the enzymes completely decompose, however in puer tea’s case it’s only 12-15 minutes so that on the long run the tea can be matured.

There are two kinds of puer teas: 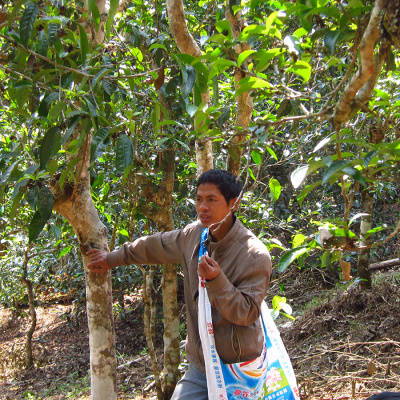 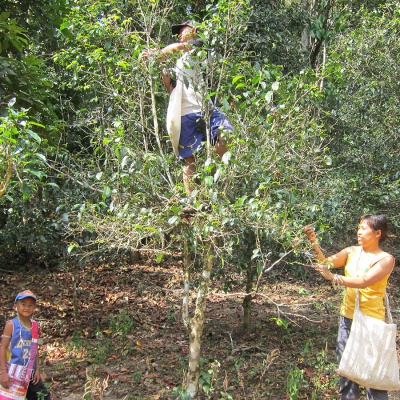 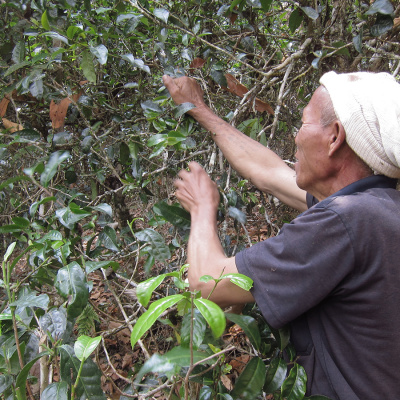 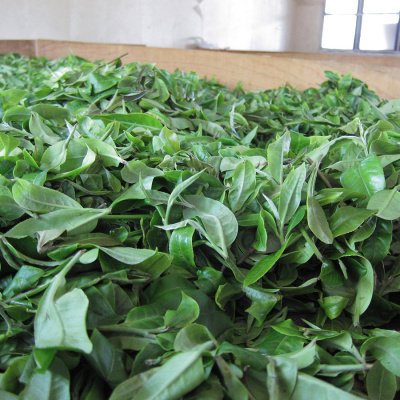 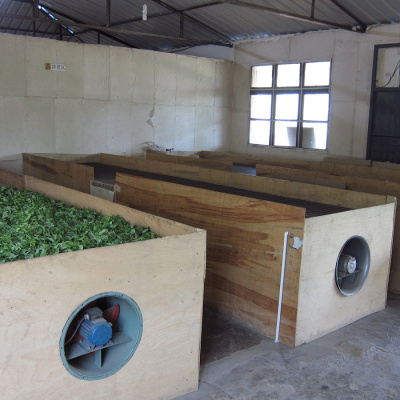 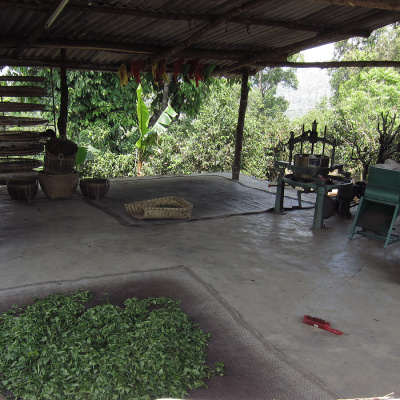 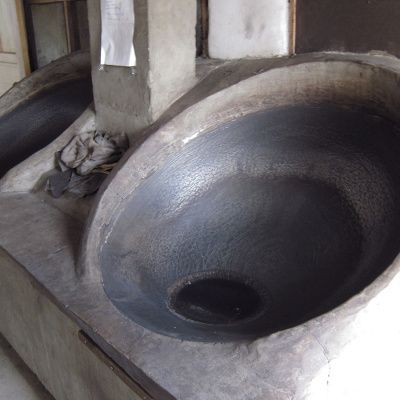 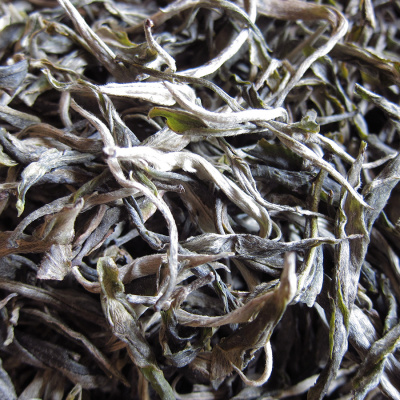 The maocha wrapped in big sacks or boxes is sent for sorting. Then the separated leaves are weighed and pressed into cakes (usually 100, 375, or 400g). The pressing is mostly done with traditional methods: the leaves are steamed in small textile-bags then pressed with large stones designed specifically for this usage. After drying, the cakes are wrapped first in paper, then in banana-leaves in groups of five or seven. 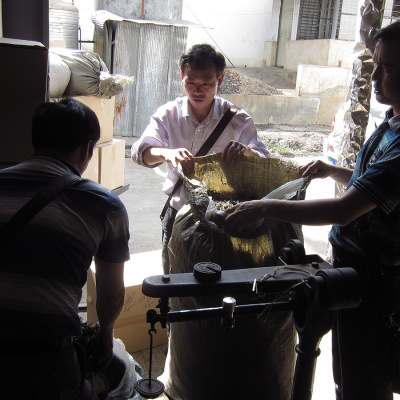 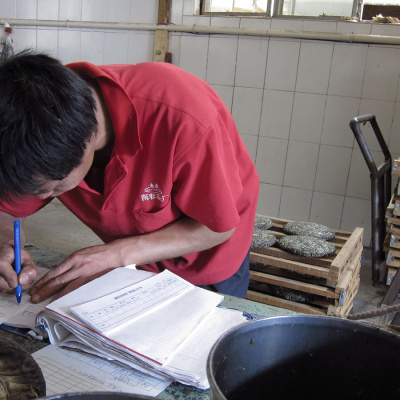 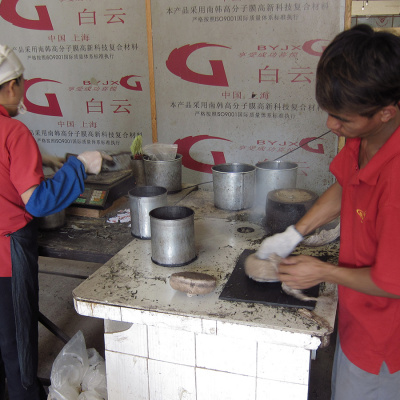 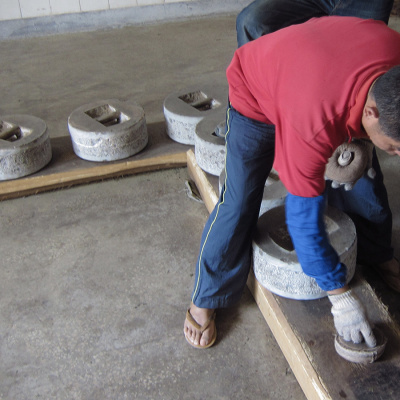 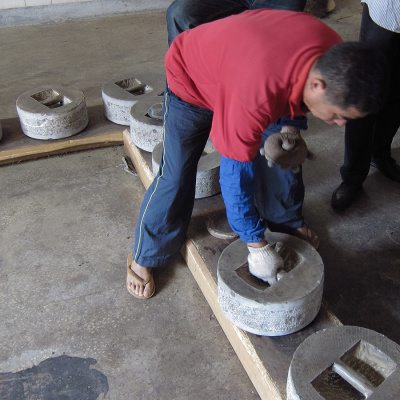 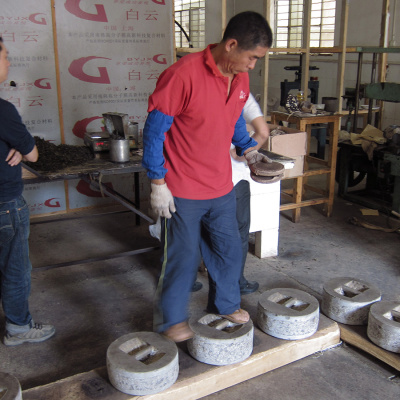 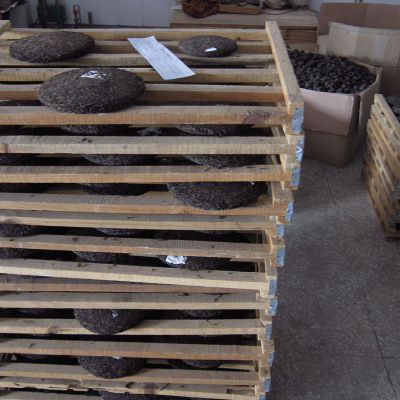 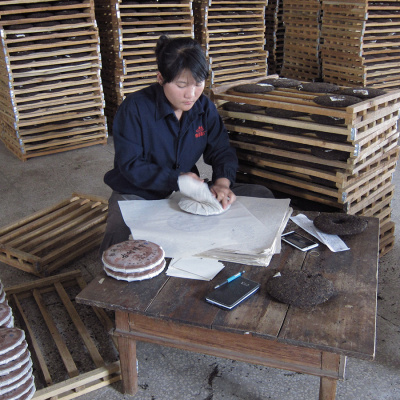 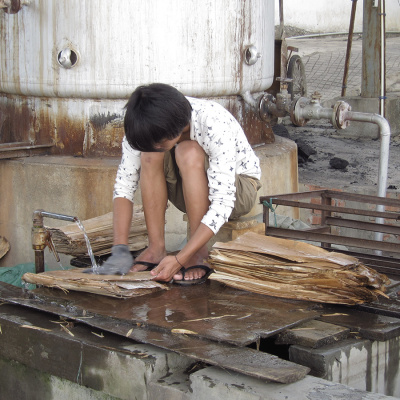 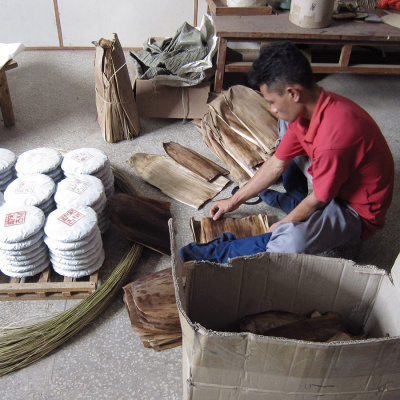 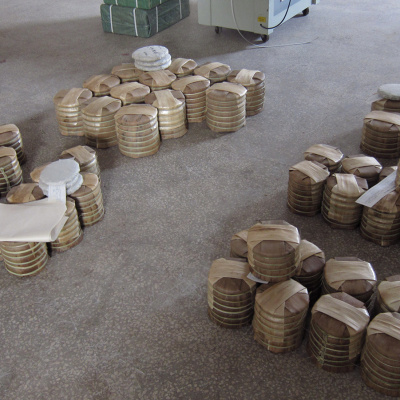 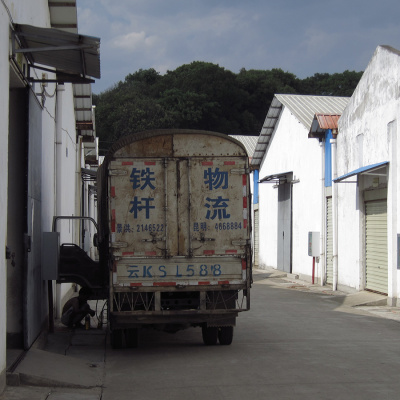 How should we store our puer tea?

The method of storing you choose is dependant on your short and long term plans for that tea. As might be expected, aged Puer tea is more expensive than young tea because there is less supply and   greater demand. Conversely, younger teas are less expensive as there is a greater supply.

Good air circulation ensures the proper health and reproduction of micro-organisms in the tea leaves which in turn, ensures the on-­going processes that create the distinctive aromatic compounds one wants in an aged pu­er tea. If you wish to facilitate ageing in your puer tea, it is important for the tea to be exposed to fresh air, or the air be freshened periodically.

Micro-­organisms prefer a stable temperature environment to encourage reproduction. According to past experience, a temperature range between 20° to 30° C is ideal to maintain long term transformation of the leaves. Of equal importance is that temperature fluctuations occur slowly if one lives in a climate where the temperature shifts dramatically or often.

Tea leaves are very good at absorbing moisture from the air. An appropriate level of humidity can assist the reproduction of micro-­organisms and excessively low humidity hinders reproduction. Additionally, excessive high humidity and lack of air circulation can lead to the development of mould which can ruin the tea.